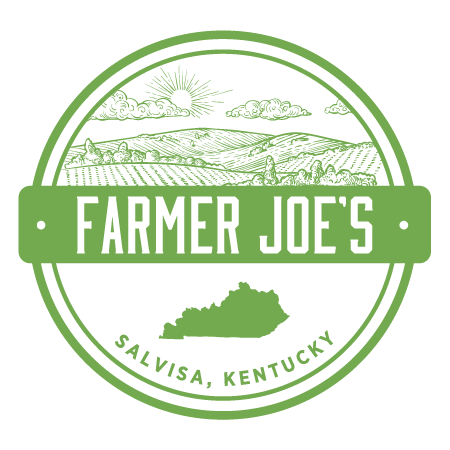 The Story of Farmer Joe's

In 1990 Clayton Weber and Dr. Donna Dutton purchased a house on a hill in Salvisa, Kentucky. Donna, a small-animal veterinarian, opened a successful clinic 6 miles down the road. Clayton, a small-engine mechanic, managed the family's modest 34-acre farm. Together they taught their children, Joseph, and Leigh Weber, the work-ethic and entrepreneurship instilled by their parents.

From nursing a deer until it was strong enough to climb stairs- to saving a year's allowance for his first go-cart- Joe cherished his childhood on the farm. In 2002 he left for college at the University of Kentucky and earned a bachelor's degree in Environmental Engineering. He traveled the country and vacationed in Europe, but after each trip, he longed for Kentucky. While feeling unfulfilled working as an Environmental Engineer, Donna gave Joe a book about farming. Inspired, Joe read it cover to cover, three-times. Although people told him it was impossible to make a living as a farmer, his mother had given him a roadmap to sustainable living.

In 2013 Joe took over the family farm, becoming a seventh-generation farmer. Joe's neighbors immediately noticed the shift-- heifers, broiler chickens, and broad-breasted turkeys could be seen rotating on pasture from the highway. A few of his earliest supporters stopped by to ask what they saw. Impressed, they offered their unused farmland for additional grazing. Today Farmer Joe's, LLC operates over 400 acres in Central Kentucky.

In one year, Joe grew a traditional wholesale cow-and-hay farm to a diversified business operation, selling retail meat and eggs. Today, you can find Farmer Joe's pastured meats in Michelin Star Rated Restaurants in Chicago, Illinois, and on family tables in Danville, KY.

Saving lives, one day at a time.

For Joe, moving home was more than a bold business decision; it was also an opportunity to care for his mom in the last years of her life.

The first of six children, Donna was raised to be tough. She often bragged about outworking boys in the family's tobacco fields. In 2010 Dr. Donna Dutton could no longer bear the chronic back pain caused by years of physical labor. She closed her clinic and began a sedentary life. Her health declined fast, but Joe intervened, cooking nutritious foods grown on the farm. Donna did not eagerly accept her new diet, but she was proud of the improvements reported during her doctor's visits.

Dr. Donna Dutton, DVM, passed away on December 20, 2016, at age 62. Her illnesses were preventable through a healthy diet and exercise, and her family misses her every day. Donna's passing remains a motivating factor for her family to maintain a healthy lifestyle.

With his mom in mind, Joe continues to raise the highest quality meats to help others protect their bodies, and ultimately live longer lives.